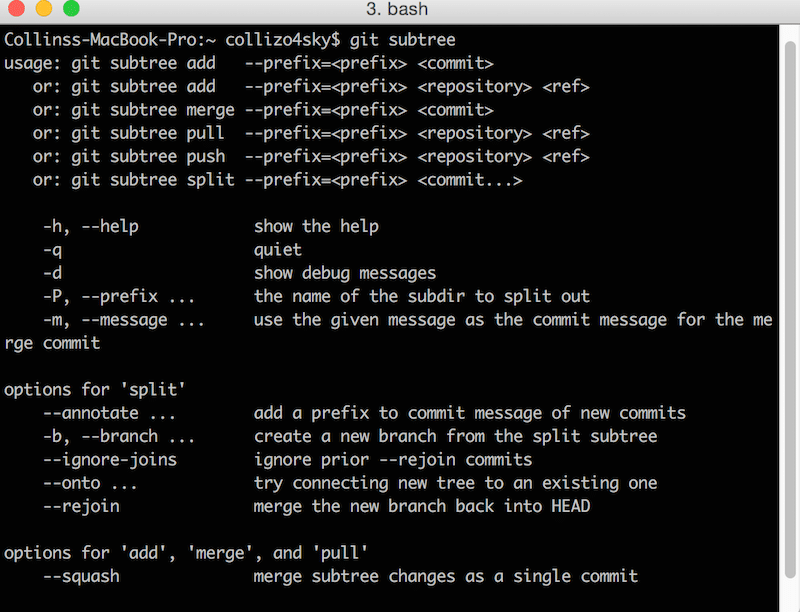 I have secretly been working on a project for a number of months now. It got a point where I decided it will be best to split some folders in the project out into their own Git repositories. Previously, the project was a large monolithic application.

I didn’t want to just split them out on a blank slate but have their Git histories maintained. After some research, I finally settled for Git subtree, one out of the many Git contributed software.

In this post, I will show us some ways we could use to split out a folder into its own repository using Git subtree.

Using my jquery-modal fork for demonstration, we’ll be splitting the examples folder into its own Git repository.

I assume you have the repo cloned to your machine already and you’ve cd into the jquery-modal folder, otherwise do that now via:

Note, all git subtree command must be run from the top-level of your working tree which is path/to/jquery-modal in our example.

To split out the folder and immediately push to its own repository at https://github.com/collizo4sky/jquery-modal-examples, use git subtree push command as shown below

* https://github.com/collizo4sky/jquery-modal-examples is the Git repo the split sub directory will be pushed to.

* master the branch to push to.

If you feel there is a lot of magic being done in method 1 or you would love to have more control of the splitting and pushing to the git repo, here you go.

The command below will split out the subfolder and output a SHA-1 hash of the split commit.

Push the commit to the git repository that will store the split.

If you will like to make some changes before pushing the split into its own git repo, you will have to:

– make the change & push to its git repository.

You can simplify the splitting and checkout to a new branch with the command below.

Thanks for subscribing!
Powered by MailOptin